I am looking for a bunch of people. I am hoping you, dear visitor, will be able to help me get in touch with any of the following folks (it’s quite a list, so I hope you’ll bear with me)…

I am working on a 42nd Anniversary Edition of my disk magazine ST NEWS. I am looking for a few people who were essential to the world of the Atari ST and/or Atari Falcon home computers, as well as some who worked on/for ST NEWS with me who I have lost touch with. The 42 Anniversary Edition will be out in July 2028, so I have time.

PEOPLE WHO ARE RELATED TO ME

A few months ago, triggered by results of my DNA test coming in, I became more interested in finding out about my direct ancestors. Since my mother’s father is unknown, I’d like to get in touch with some people who are related around that side of the family but that I have never been in touch with. I think my mother was too ashamed about her past when she was still alive. The below people are mostly half-siblings of hers.

PEOPLE WHO HAD TO DO WITH THE METAL BANDS FIRST ATTACK, DÉTENTE, FEAR OF GOD, OR FOG

I am the webmaster of the official Fear of God/Détente/Dawn Crosby site. To lift the content of that site to the next level, I need to contact quite a few people who were involved with those bands, or Dawn Crosby. I’d like to pick their brains about their time in the band, or their memories of working with Dawn.

There are a few people I’d like to get in touch with who have nothing to do with the above.

If you know any of these, please contact me. Oh, and I am also looking for a bunch of things :-). Thanks for your time!

In June 2016 I decided to partake in the Genographic Project, which was where National Geographic organised a global, affordable and appealing way to have your DNA analysed, to give insight into your ethnic background. Ostensibly, it was set up to show people how we’re all much more related than you’d think (perhaps most shockingy for those who consider themselves of a pure race). All you had to do was collect some saliva and mail it off to be processed, after which you’d find out where you fit on the huge patchwork quilt of human ethnicity.
My urge was mostly triggered by regular curiosity, but also because one of my grandparents (my late mother’s father) is unknown. My maternal grandma had been, let’s so, fruitful with several partners before she got legitimately married. My mother used to say her biological father was probably a German soldier (her having been conceived in World War II), but there was no telling whether that was actually true. She had distanced herself from that past, at any rate, by legally changing her surname from her biological mother’s to her adopting family’s the moment she became of age.
I had always known about these circumstances, roughly, except for the actual dates and later marriage, which my dad found out about when he did family tree research around the turn of the century. In fact, my mother turned out to have had two half-siblings from before her mother’s marriage, plus two more that were conceived in wedlock. Except for one of her pre-marital half-siblings, whom I had known as an uncle, I did (and do) not know where the others (who happen to be aunts) live. My dad said that my maternal grandma’s pre-marriage history was also unknown (and, indeed, upon my dad revealing it, initially denied) by her grandchildren.

Anyway, back to the ethnicities revealed by my DNA results, which I received after a few months:

Because I had primarily known about my family being from the Dutch province of North Brabant (granted, that’s mostly from the Karsmakers side), I was a bit surprised by the analysis. Had my mother’s genes instilled a lot of Scandinavian heritage? I didn’t know. I also didn’t really know how to interpret the results, so my initial enthusiasm petered away. I got back to my daily life and didn’t heed the DNA stuff much. Somewhere in 2019, National Geographics discontinued their Genographic Project, too.

Early this year I stumbled onto another site, 23andme.com, where you could order DNA collection kits as well. More or less on a whim, I ordered three (one to use for myself as a re-start, one for my wife, and one for her son – my stepson). By the end of March I received the results again. They were a little different, and perhaps more logical considering the German soldier anecdote:

85,6% French & German (which for some reason includes Belgium and the Netherlands)
12,3% Great Britain and Ireland
0,5% Scandinavian
1,6% broadly Northwestern Europe
<2% Neanderthal

Part of the results on 23andme.com also showed so-called “DNA Relatives”, i.e. people with whom you have a certain part of your genetic material in common. The closest  turned out to be a 3rd cousin, which is a person with whom I very likely have 2nd great-grandparents in common (see picture). 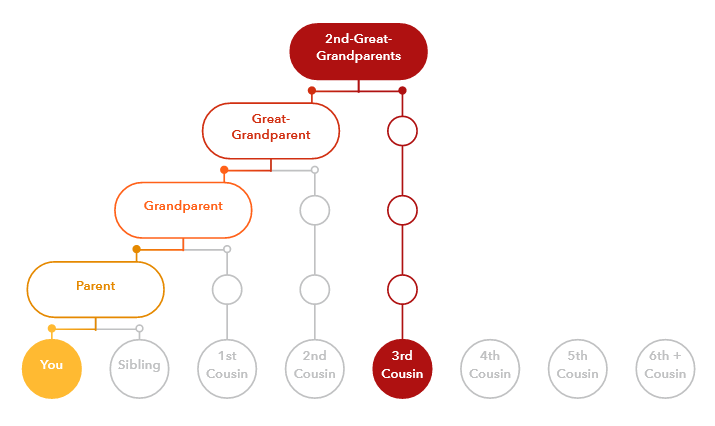 Someone on 23andme.com advised me to check out a pretty good site to build your family tree, ancestry.com. I started converting some of my father’s family tree research (for which he had used a powerful but not very visual Dutch program called Aldfaer). This was rather a lot of work, initially, especially because I discovered that his research had been woefully Karsmakers-name-centric and unfortunately riddled with typos and even wrongly typed dates. After having added one or two generations to my family tree on the site, though, I noticed that ancestry.com started giving me Ancestry Hints, which are suggestions on who might be related to a person you have already added to your family tree. The algorithm is quite reliable, as it retrieves information from their vast database that has (parts of) names and specific dates in common with people in your tree. They take this information from a large variety of reputable (indeed, often official) online genealogical sources, as well as other ancestry.com member family trees. In fact, their database is so enormous that you end up with more hints than you have time to handle (to wit, my current tree has 2363 people with nearly 5000 of these hints I should still check out). And every person you add gives you more new hints.
To give you an indication on how user-friendly ancestry.com is: I started on April 13 and today, May 8, I have added the abovementioned number of people, and managed to find all my direct ancestors that ancestry.com knew about.

Except for these arguably sterile statistics, ancestry.com also allows you to unearth information of a non-genealogical type. I found out, for example, that one of my granduncles was put to work in Germany during World War II (because ancestry.com has access to the files the Germans kept about these things), and that several of my more distant ancestors (10th great-grandparents and up) are from Belgium, Denmark or, indeed, Norway. I have the feeling that I am only just at the beginning of this road of discovery!

For those of you who have reason to find out whether they are related to me (and, if so, from whom exactly), here’s the Excel file with my direct ancestors as far as I know them: Direct Ancestors.
For those who want to actually compare their DNA with other people’s, or have it analysed in a variety of ways, you can upload your raw DNA data to Gedmatch (if you want to compare it to mine, my kit number is UY9604721). The Gedmatch site will accept raw DNA data exports from 23andme.com as well as other popular DNA analysis providers. It will also allow you to do much more DNA-related exploration that has so far turned out to be too complicated for me to explore.
The ancestry.com site also offers their own DNA analysis kit, but they unfortunately do not allow for raw third-party DNA data to be imported. Also, in case you want access to their whole Ancestry Hints database when building your family tree, you need to pay a fee.