Throughout the years I have suffered various instances of GAS, a.k.a. Guitar Acquisition Syndrome. Here’s the gallery of my current and former guitars.

This was a guitar my father bought for me in 1982, when I started attending guitar lessons. As my first guitar, this particular model held a certain sentimental value. It was an Aria AC7 “concert guitar”, a nylon-string acoustic. After I took it with me to a beach party in the late 90s the hardware got all corroded. FATE: I hardly played it anymore so I sold it in January 2005. 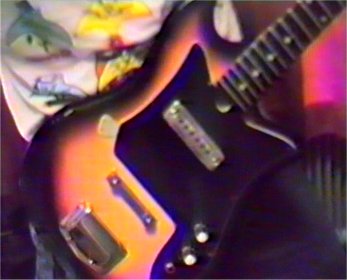 I got this guitar from an English friend of my stepbrother’s in the mid 80’s. I seem to recall the brand was “Kay” or something, though on a video I saw later there was no brand name anywhere whatsoever. It had a totally “retro” look (or perhaps it actually was quite old). No tremolo, two controls, front-mounted output jack on pickguard, Strat-style headstock without any decals. FATE: It was stolen from our shed in September 1991. The fact that it was in a shed indicates how much I used it. I had no amp, and I had never even put new strings on it after the first set wore down. I used it primarily to playback in the mirror, that kind of thing.The picture is crummy, it’s a VHS-to-DVD-to-JPG vidcap.

A “Cyclone”, bought in early 1994, together with a small “Gorilla” amp. Didn’t stay in tune much, and the hardware got horribly rusty after I practised in a damp cellar with a band once. I got it signed by Yngwie Malmsteen, and later by John Petrucci. Due to moist and cold weather conditions during Petrucci’s signing session his signature wore off quickly. FATE: When moving house (in 2000) I left it in the basement of my old place, more or less intentionally. For all I know it might still be there – it surely seemed like many other previous inhabitants had left discarded items there.

A ‘crafted in Japan’ 1997 ’68 Reissue Fender Stratocaster. A dream come true. I’d wanted a Stratocaster ever since I saw and heard people like Jimi Hendrix and Ritchie Blackmore play them, and because I liked to see the grain of wood I liked natural finishes the most. The headstock boasted signatures by Joe Stump, John Petrucci, Steve Vai and Yngwie Malmsteen. I bought it early 1998. FATE: I traded it in when I upgraded to the ’74 Stratocaster, pictured lower on this page, in February 2005.

A Fender Stratacoustic. A nice guitar, though horribly unbalanced and with plenty of evidence of shoddy workmanship on the inside. For those moments when acoustic sounds were what I preferred, which to be honest wasn’t that often. I bought it in autumn 2001, just after my divorce, basically because my ex-wife wouldn’t let me buy it while we were still together. Some reason, eh? FATE: The reason for the buy might indirectly be behind why I didn’t cry when I sold it to a good friend early 2005 (hi Christophe!).

A 1991 Fender Talon V, kindof a “super Strat” guitar. Quite light (basswood) but with a killer tremolo (Floyd Rose Pro double locking) that stayed in tune no matter what. The humbuckers were DiMarzios, the single coil is a Fender Strat-type pickup. Bought this guitar through eBay, autumn 2004. FATE: Sold it in May 2005 to my good Heartfield Forum friend, Mr John Simmons. This is the only guitar I rather regret having sold. If I ever find another Talon V – though preferably in Montego or regular Black – and the price is right, I’d like to get that.

A 2004 Stratocaster clone, made from a USA Warmoth body and neck. Two-piece, rear-routed alder body with lacewood (the Silky Oak from Australia, Cardwellia sublimis) top. AAA grade birdseye maple thin-profile neck with Pau Ferro fretboard and abalone dot markers, and a CBS-style reversed headstock (with flame maple veneer). Gotoh SH38 machineheads, 6230 stainless steel frets, and the neck has a compound 10″-16″ Radius. It has active EMG SSH (SA/SA/81) pickups, Floyd Rose Original locking tremolo, Schaller strap locks…all the other touches I’d always wanted in a guitar. Plays like a dream, looks great, feels great, hell, it even smells great. My axe of preference, with lots of sustain and a killer sound.
It had been assembled by December 2004. The picture is the end result after I had the axe scalloped (November 2005) and refinished in high gloss transparent (July 2006). After the scallop job it plays even better, with ultimate tone control. Man, I love this guitar to bits.

A 1991 Heartfield (by Fender) Talon IV, another “Super Strat” guitar. The difference with the above Talon V is the orientation of the headstock and the colour (here Montego Black instead of Midnight Blue). Bought it through eBay, February 2005. FATE: Sold it in August 2005 to Joey Cervalho via the Heartfield Forum. Unfortunately, in transit, it got banged up pretty badly – to my and Joey’s shagrin.

When I bought the Japanese ’68 Stratocaster reissue, basically what I’d always wanted was an authentic late 60’s or early 70’s Stratocaster in natural finish. So when I found this one on the Internet (sold at www.stratcollector.com, whose people I had had previous contact with through my Strat Central site) I decided to delve deep into my savings and trade in the aforementioned reissue as well. It’s a stock 1974 guitar, with quite a heavy 3-piece ash body, which was just about 31 years old when the FedEx man delivered it to my doorstep in March 2005. FATE: Unfortunately, due to some financial shit with my second divorce I had to part with this boyhood dream in May 2007. Well…let’s say she (the guitar) was fun while it lasted…

I bought this one as an investment. It arrived in April 2005. I bought it from the same guys as the ’74 Stratocaster, www.stratcollector.com. I mean, who can resist the description they had put up for this guitar…

Well, as they say, resistance was useless. In fact I was a little shocked at my own eagerness to yield to this temptation. When I received it and plugged it in I was surprised at how sweet it sounded and how endless its sustain was. So in the end it turned out not just to be an investment, but a great guitar to play as well. 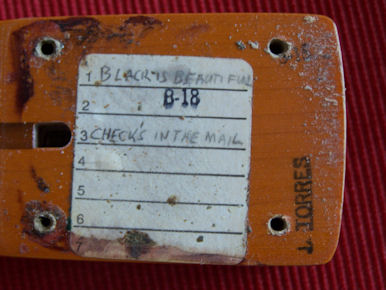 …and it was assembled by J. Torres.

I loved this guitar dearly but when a need to clear up and get some money hit me, I parted with it in February 2014. Sold it to guitar fan Daniele Benintendi. 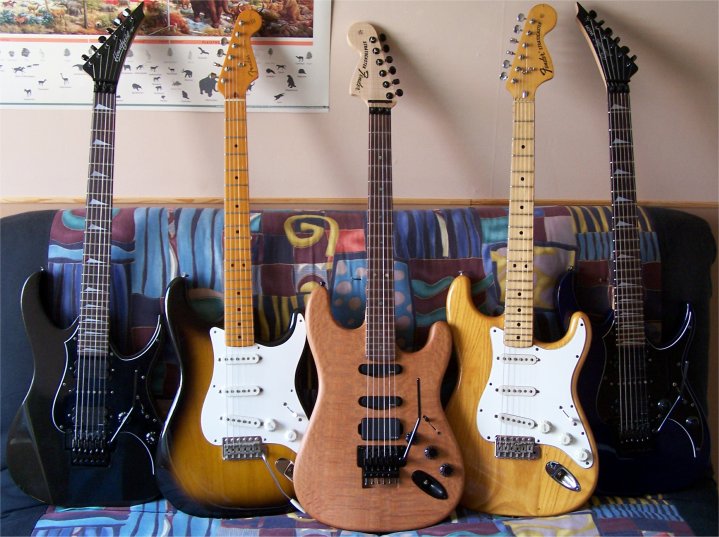 The whole collection, around May 2005

The Explorer, to me, is the most aesthetically pleasing guitar design after the Stratocaster. I therefore bought this beautiful 2004 Epiphone ’58 Korina Explorer through eBay in April 2005. Played very well, looked good. FATE: Because it just sat around being beautiful but not getting played enough, it got sold the way it got bought: I sold it via eBay to Marcus van Opstal from Dieren, the Netherlands, in August 2005. I hope he plays it more often than I did.

Further exposure to eBay brought an auction of this Eko ST-YM guitar (very similar to the Yngwie Malmsteen signature Stratocaster, minus the $1500+ price) to my attention. It had a scalloped (and rather chunky) two-piece maple neck and pretty OK workmanship. Action was quite high and the tremolo cover holes did not line up with the tremolo block string holes, but it was a nice guitar for the money (they are Chinese guitars, US$ 399 new). I didn’t screw in the tremolo bar because then I’d never be able to stop re-tuning… Won the auction in June 2005. FATE: In October 2005 I sold it again on eBay because it didn’t stay in tune well enough and I’d seen a better Yngwie-style guitar that I’d not been able to resist (see below).

In August 2005, along came an auction of a better quality Yngwie-style guitar with better hardware, with an officially Fender-licensed one-part scalloped neck and better general specs at an eBay ‘Buy Now’ price that made me instantly want to part with the Malmsteen-like instrument showed higher up on this page. Solid alder body, off-white finish, large CBS-style headstock with truss rod at the headstock end, and it stayed in tune better than that Eko. FATE: After I had a luthier do a professional scallop job on my above Warmoth Partsocaster I found my total playing time on this particular guitar instantly plummet to “never”. So once more I enlisted the services of eBay to get it off my hands. This happened in the first week of December 2005.

After a year and a half of successful gas-containment, I succumbed when someone at the Heartfield Forum wanted to sell a Fender Prophecy I bass. As I had been toying around with the idea of recording some metal versions of Commodore 64 tunes, I heard the ever-tempting knock of opportunity. In January 2007 I took the chance and bought it – not having heard it or seen it, nor actually knowing the seller beyond how to spell his email address to Paypal him the funds. Thankfully it proved to be a pretty flawlessly looking, good sounding and surprisingly light (3.6 kg) bass. FATE: After getting the DR6 (below), I used it less and less. I put it on Marktplaats (Dutch equivalent of eBay) and sold it to Raymond de Bruin in August 2010.

Well, this wasn’t really GAS. Perhaps you could call it “GAS by proxy”. This is the guitar my then wife and myself bought for our daughter in June 2007. She was 3 years old at the time. It sounds quite OK, stays in tune better than the above Eko. And it looks darn cute on a little girl 🙂
As cute girls grow up and show a continued lack of interest in string wizardry, however, I once more utilized the services of eBay to take this off my hands. That succeeded in February 2014, when I sold it to Maarten Mijwaart.

Around the time when my divorce was getting finalised, August 2006, I felt I needed to spoil myself a little. It’s odd that you sell one guitar (see above) and buy another… Well hey. Heartfield enthusiast Paul Abrams wanted to sell it, so I ended up buying this very nice 6-string Fender DR bass. Gold-plated hardware, nice black finish, in good shape. It’s got sustain up the wazoo and, like its cousin above, is remarkably light (4.9 kg).

Early February 2018 I discovered AliExpress.com and, through it, sellers of Chinese guitars. At a price of a mere € 218,05 (including shipping to the Netherlands!) I got this “Gibson” (actually Shengyun) Gothic Explorer knock-off, receiving it on 10 April. It looks great and plays quite nice. The wax pickups are quite decent too – I had heard that most Chinese guitars have microphonic shit pickups – and they even made it a bit of a custom item due to my request not to add fretboard inlays at the 12th fret (which this model originally has). There is a bit of string buzz on the low E and I highly doubt this very light guitar is made of mahogany, but my modest expectations were met. Now I have a guitar that I can use for tunes that require drop D tuning (my Warmoth Partsocaster has a floating Floyd Rose tremolo which is way too much of a hassle to change the tuning of).

Any cookies that may not be particularly necessary for the website to function and is used specifically to collect user personal data via analytics, ads, other embedded contents are termed as non-necessary cookies. It is mandatory to procure user consent prior to running these cookies on your website.