I remember fairly well the days of old. In this case I mean the days near the end of July  2015, well not that old then perhaps, when within the space of two days I discovered GameBase 64, GameBase ST, Atari ST TOSEC and DemoBase ST. I could barely contain the intense feelings of nostalgic joy that coarsed through my veins, making my retro heart pulse and throb. In the days that followed I relived the even more ancient – and more authentically true – days of old, from the mid 80s to the mid 90s, playing all the games I used to like so much. “Jumpman Junior”, “Dino Eggs” and “Fort Apocalypse” were among the first, also the earliest games I had procured in my virtually virgin C64 days. And from there it went to many other fondly remembered C64 games, too many to list. I spent hours configuring stuff and trying to get a STelladapter to work. Next were equally endearingly memorized games and demos from the Atari ST era. Glorious days when the world I was in, and I myself, seemed both more innocent and more alive.

The GameBase efforts had been underway for years. I had been very slow to discover these gargantuan undertakings – a GUI offering a variety of good emulators that allowed for just about any title (whether game or demo or whatever) to be selected and smoothly run, all from within one convenient package. Similarly, various TOSEC endeavours had been created for just about every retro computer or console platform worth its salt (and, frankly, some so obscure they were perhaps not worth all that much salt). A bit of research revealed ready-made databases, whereas a bit of torrenting yielded vast collections of titles, ready to be merged with the GameBase files. The equivalent of years of collecting, all at one’s fingertips, running pretty smoothly and accurately on one’s own PC. GameBase 64 took up a little over 11 Gb, GameBase ST less than 5 Gb. Peanuts!

And DemoBase ST, although based on the same idea as GameBase, took things one step further: A step most convenient for the demo-loving Atari ST scener, whether former or current. As it happened, DemoBase ST strove to offer an as-complete-as-possible collection of individual (!) demo screens. The aim was to allow anyone to browse any screen by any demo crew, even individual ones from larger mega demos. You could then launch them, where DemoBase ST took care of the appropriate emulator launch parameters.
Version 2 of the DemoBase ST project, created and maintained by nigh-professional wild-mud-runner Dave Haylett, had been firmly underway since at least the beginning of 2007 with its release on http://dbst.atomas.com. That year saw a flurry of additions and improvements, until things started slowing down a bit in 2008 and grinding to an unfortunate halt during 2009. At a later date he also lost his source code (or at least thought he had).
I am immodestly pleased to say I may have had a bit of a hand in Dave’s finding the motivation and energy to pick up again where he had left off. In fact, he re-built version 3 from the ground up, bypassing the limits of the original version’s design decisions and adding a host of new bells and whistles.

The main features of DemoBase ST are: 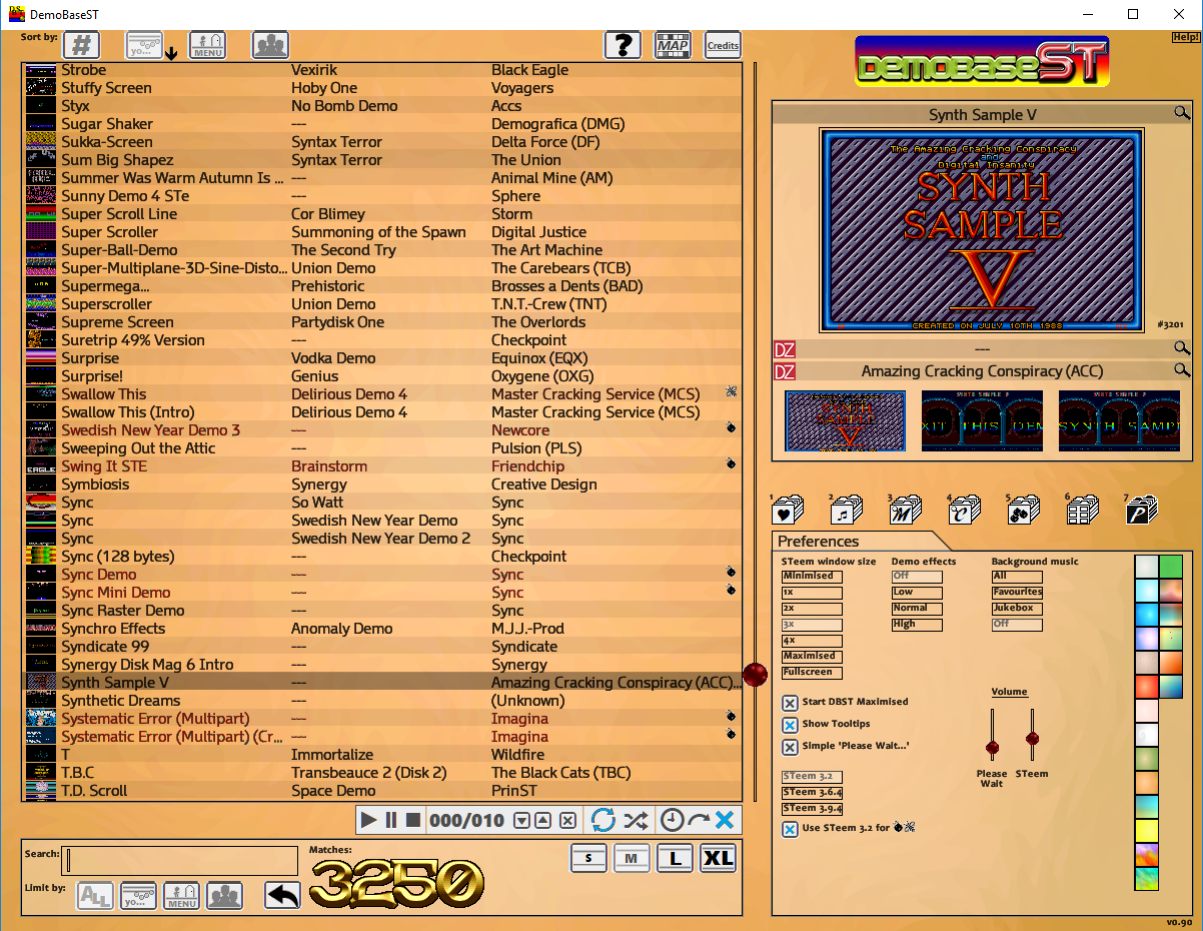 The whole thing is packaged in a very flexible and quite intuitive user interface that is utterly configurable. It even has many (dozens?) of little hidden demo effects that pop up left, right and centre (though, worry not, they can also be switched off). It is evident that Dave has delivered a labour of love, a respectful tribute to the world of ST demo screen creation. The new version of DemoBase ST, which started life somewhere in 2017, is now finally ready for a public release via its new online home at http://www.demobase.st. If you loved the world of ST demos, you owe it to yourself to check it out!